Last year, Helge Klein, Shawn Bass and myself presented the results of around of testing on Folder Redirection at events such as Citrix Synergy and BriForum and via a series of blog posts. This year, we again delved into various testing scenarios, presented to well attended sessions and this blog post summarises our 2015 results.

Why does Folder Redirection continue to a topic of discussion? With the release of Windows 10, Folder Redirection will continue to remain a component of the enterprise desktop, as the basic architecture in Windows that requires it, has not changed. A Windows profile still contains user folders such as Documents, Desktop, etc. that need to be protected. Additionally the basic structure of the profile has not changed.

Just as we continue to discuss printing in VDI and SBC environments because users still print, so to shall the discussion around folder redirection continue.

Folder redirection remains a popular method of user data and profile management because it can improve the user experience by achieving two things:

However, by implementing folder redirection, we’ve moved data that applications constantly interact with from the local machine to a shared resource. This means that good user experience now requires your storage back-end and network to be responsive and highly available.

Those shared resources (network, storage, hypervisor, CPU etc.) contend for resources, especially in today’s data centre with traditional shared storage and with most applications and file services on a virtualized platform. This is what has driven us to to do this testing and present the results to the community - many organisations don’t consider the ramifications of implementing folder redirection. Performance on day 1 may be good, but as an environment grows organically and resources become further contended, user experience suffers.

This year, we focussed our testing on several areas:

Utilising a specific version of SMB requires that both the client and server are capable of speaking that particular version of the protocol. If you want to read a thorough explanation of SMB versions and how they are negotiated, this article is recommended reading - Windows Server 2012 R2: Which version of the SMB protocol (SMB 1.0, SMB 2.0, SMB 2.1, SMB 3.0 or SMB 3.02) are you using?.

I’ve already covered the tools that we’ve used in our testing in this blog post - Replicating Our 2015 Folder Redirection Performance Tests In Your Own Lab.

In my own lab, all of the testing was done on the following hardware and software:

To determine any difference in throughput performance between SMB 2.1 and SMB 3.02, we’ve used the DiskSpd tool from Microsoft. With this tool, I performed tests from the client at various block sizes using a 256MB file hosted on an SMB share on the server. This was repeated for servers running Windows Server 2008 R2 and Windows Server 2012 R2.

In essence, we there are no performance differences between the two SMB versions: 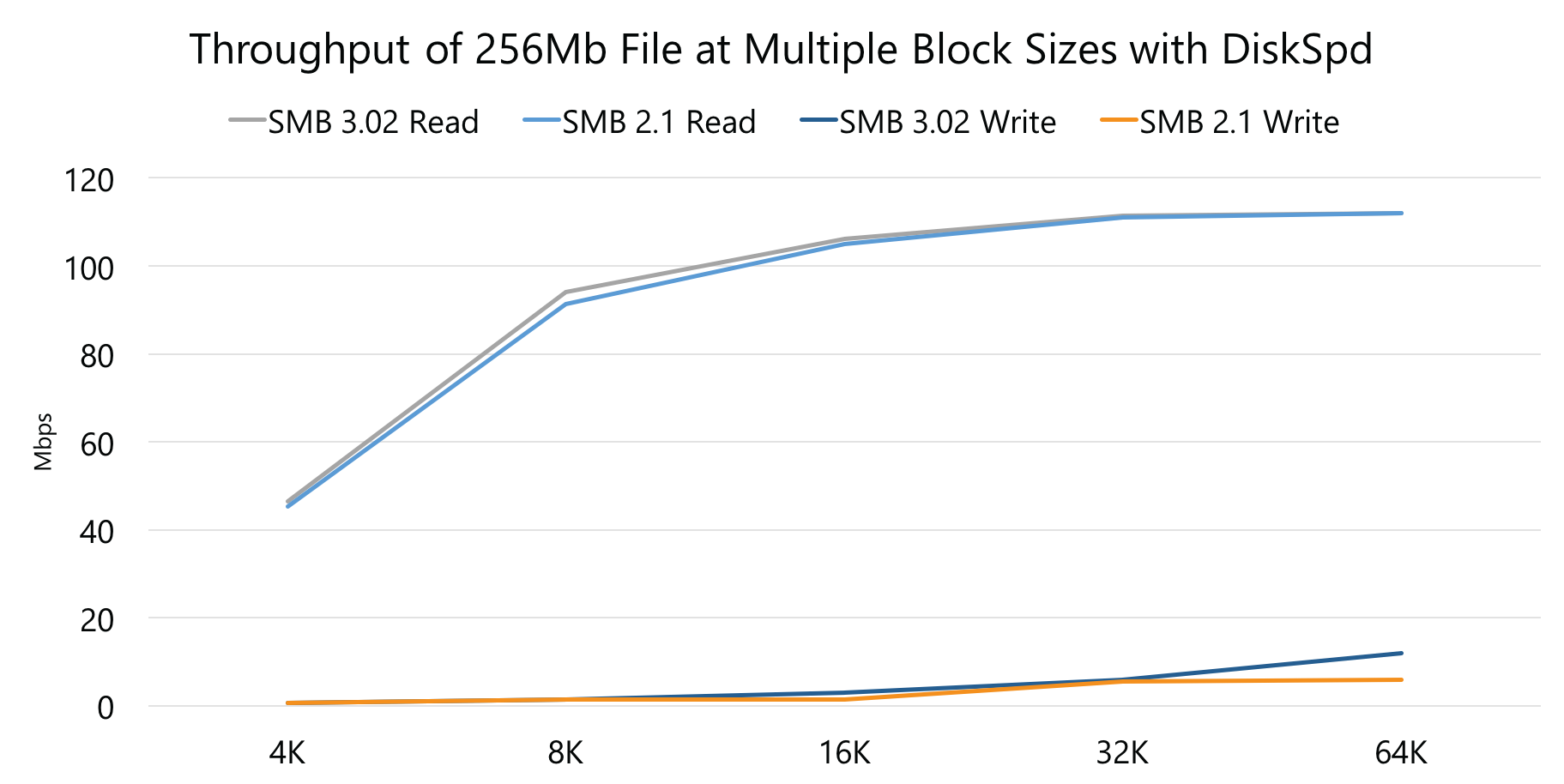 No difference in network throughput between SMB 2.1 and SMB 3.02

In the above test, the underlying hypervisor host was set to high performance mode, so I re-ran the same tests with the host set to balanced performance. This had an interesting result: 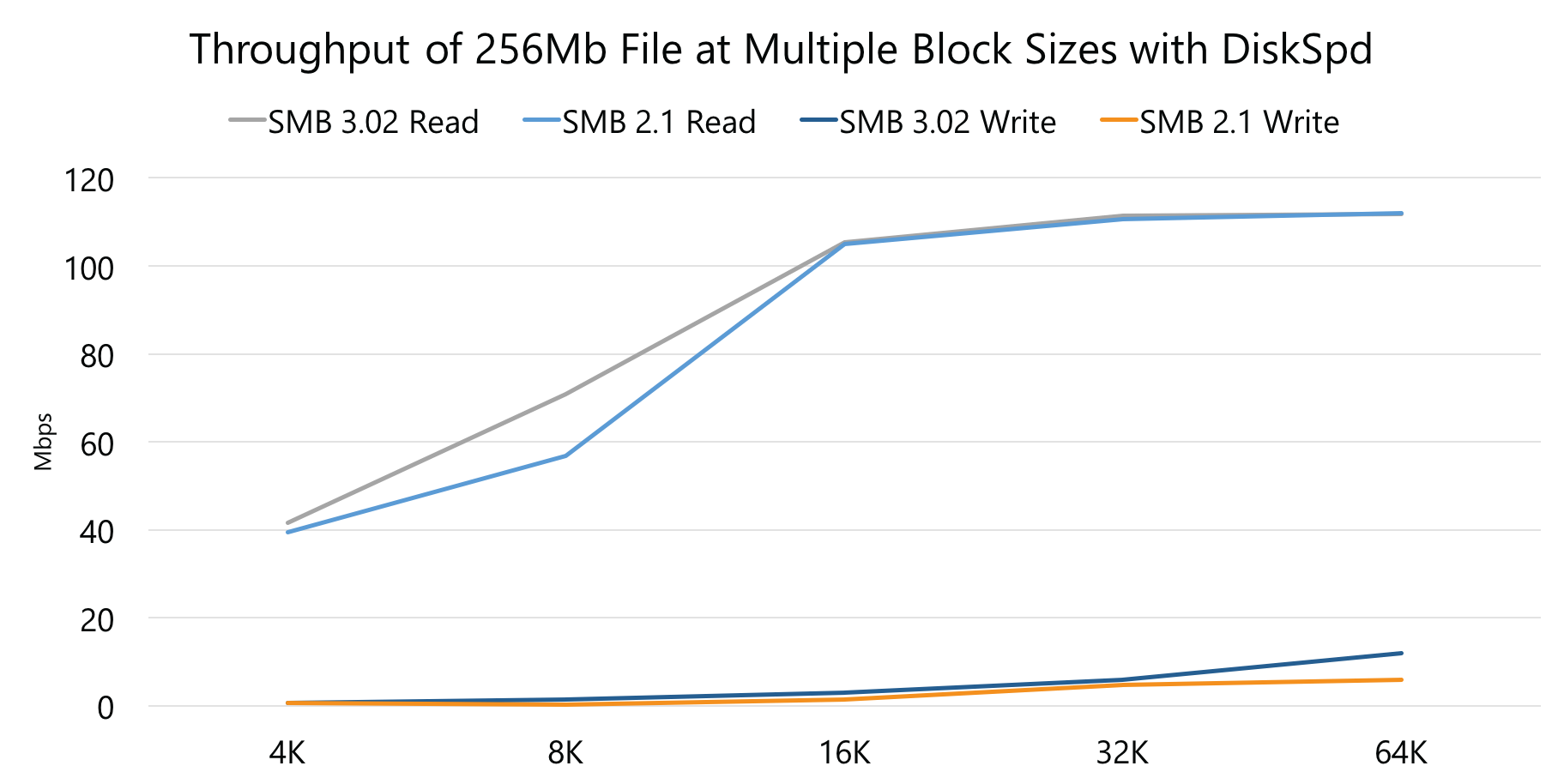 The throughput performance at 4K and 8K block sizes dropped off when compared to high performance mode. This makes sense when you consider that transferring a file at smaller block sizes requires more transactions between the client and server, so the server must process more. With less CPU resources available, performance suffers.

Interestingly, it appears that SMB 2.1 read performance may suffer in the configuration more than SMB 3.02. Keep this in mind when we show results of some workloads tests and result with SMB 3.02, in part 2.

Nimble Storage has a great blog post that shows that across various workloads, the majority of block sizes are below 16K in size. If this is the case for user home drives and user profiles, then there should be a performance gain by setting the hypervisor host (or even the physical file server host) to high-performance mode.

Another tool was used (i/o performance tool) to measure file copies from server to client. This showed very little overall performance difference between the two protocols but for whatever reason those file copies with SMB 3.02 on average were slightly longer than SMB 2.01. 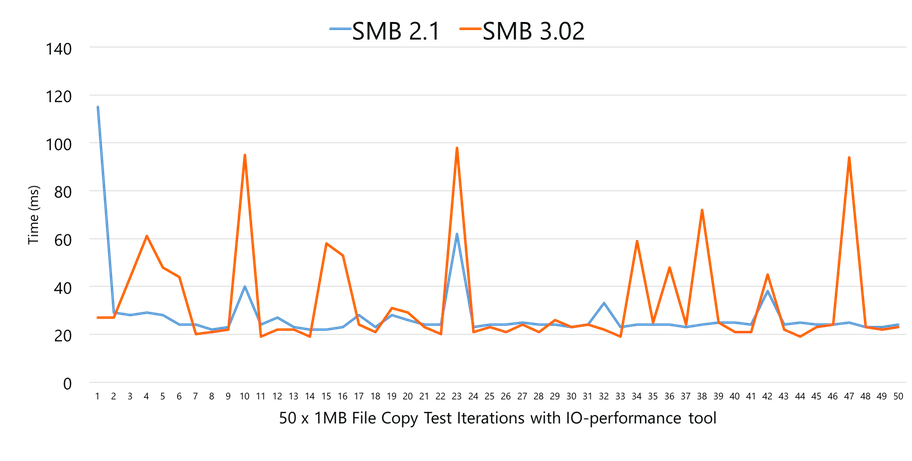 Any difference between the two protocols wasn’t shown in our user logon tests - a practical measure of any performance difference.

To test logon times, we configured what we consider to be an enormous user profile and test environment with the following details:

No difference in logon times.

In short, there are no differences in logon times between the two protocol versions.

In part 2, I’ll cover the results of the File Server Capacity Tool tests.