To replicate the testing, Helge wrote a small utility that can be used to simulate the file access performance by reading and writing from a file using different methods. The tool, FileIOTest runs 4 different tests:

This is useful for testing this scenario and is quite flexible:

This testing showed that file IO performance is generally not significantly impacted by client and server SMB versions. As long as both are capable of SMB 2.x or better performance is stable. The chart below details the results across 4 scenarios:

The exception here is the API function GetPrivateProfileString() which performs significantly better when called on a client using SMB 2.1, targeting a server capable of SMB 3.02. SMB improvements in Windows Server 2012 R2 have actually benefited older clients, but seem to have had the reverse effect on more recent versions of Windows.

While all VMs in our environments are patched via Windows Update, we did not get a chance to re-run the tests with all of the currently available hotfixes for file services.

If you’re redirecting AppData, you’ll need to understand how your applications are interacting with files in the user profile. If they use this method (which is very common), performance could suffer as a result if you aren’t matching your client and server versions of Windows.

One additional behaviour that we noticed, contrary to Magnar’s article, is that the negotiation between client and server only happens once, rather than for each file IO access. This can be shown by capturing traffic between client and server with a Wireshark trace. The screenshot below shows the protocol negotiation and then several read requests by the client to the server:

SMB Negotiations Occur only Once Per Session

Folder redirection is a feature that most environments will not be able to avoid. The various reasons including abstracting data or specific architecture choices for virtual or physical desktops, means that folder redirection will remain an integral part of the enterprise desktop. While there are a number of 3rd party alternatives and approaches, I may cover those in seperate articles.

To that end, here are our recommendations for getting the best out of folder redirection. In no particular order:

These are general recommendations for all environments and depending on your own requirements and how you are managing your virtual or physical desktop estate, there may be additional considerations.

We do continue to recommend looking at alternatives to AppData redirection - there are plenty of user environment management / profile management solutions available to you.

Determining the Version of SMB Negotiated

If you are using Windows 8 and above, PowerShell now includes a cmdlet to determine the version of SMB that is negotiated for each connection - Get-SmbConnection. PoweShell must be elevated, but this will show all connections from the local client. 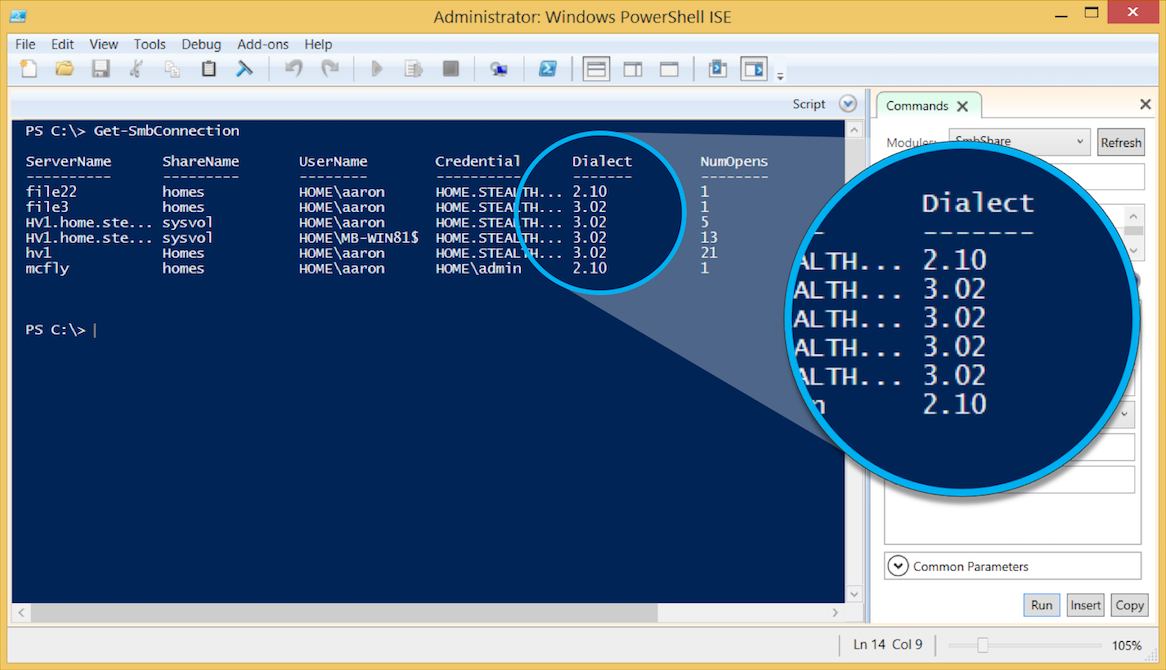 Use PowerShell to View SMB Connections

This year, we’ve covered additional scenarios, and there are always additional tests to cover. Future editions of these presentations will include the impact of folder redirection on Login VSI results and we’ll look at whether Windows 10 and Windows Server 2016 improves performance.

To summarise this round, I’ll leave you with these key points:

Want good user experience for your users with folder redirection enabled? You’ll need to put in the effort to determine the optimal configuration in your environment.