With a hosting renewal pending I thought it past time to migrate to a new platform for stealthpuppy.com. While I’ve found WordPress to be OK with plenty of support for extensibility through plug-ins, I’m not keen on paying for a blogging platform that I don’t actively make an income from, nor do I want to deal with the hassle of a multi-tier platform using MySQL, PHP and WordPress itself.

Over the past week or so, I’ve migrated stealthpuppy.com from WordPress to Jeykll and to say that I’m impressed with the results is a massive understatement. The affect on the performance of my site has been phenomenal.

In this article, I’ll give you an idea of how I migrated from WordPress to Jekyll, the challenges I experienced and an overview how I’ve built the new stealthpuppy.com.

To be fair, WordPress has, mostly, served me well for almost 14 years. This site started out on Community Server and I migrated to WordPress in 2006 on GoDaddy and moved over to Bluehost in what may have been 2013. In that time, I’ve gone through many versions of WordPress, PHP and MySQL, a number of theme changes and too many WordPress plug-ins that I can count. At a guess, hosting has cost me about $1000 USD over that time.

While I may not have had major down time, I’ve had a few close calls and certainly more time that I would have liked spent troubleshooting site issues, messed up text as the result of migrations or upgrades, or plug-in issues.

Since getting my head around Markdown, I’ve not been comfortable with the fact that my content has been tied up in a MySQL database. I’ve used a couple of different WordPress plug-ins to back up the content, but once you’re in a certain platform, it’s hard to get out. There’s nothing proprietary about plain text.

Additionally, WordPress should be worrying about the security of their sites regularly. Seeing reports of issues with plug-ins or WordPress itself is pretty common. Was my site ever compromised? I can’t say for certain that it wasn’t.

Pushing Me Over the Edge

About 2 weeks previous to this migration, I’d logged into my WordPress admin console and received PHP errors when attempting to update to the latest release. The last thing I wanted to do was log a support call with my hosting provider, because I’d have to reach for my credit card.

So a failing site and the prospect of having be locked in for another 12-36 months worth of hosting costs forced me into action.

I’d looked at Jekyll a couple of years ago and have seen enough other sites built on Jeykll to pique my interest. Additionally having been on GitHub for some time, leveraging GitHub Pages to host my site for free, was hard to pass up. Manging my entire site in a Git repository and being able to serve it up locally for testing are immensely powerful.

Markdown All the Things

I’m loving writing content in Markdown. I’ve been using it for my docs site for some time. Writing articles in plain text frees you to concentrate on content and let Jekyll worry about the formatting. Once your content is in Markdown (i.e plain text), deploying Jekyll to GitHub Pages is so simple. Additionally, I could choose to deploy to an Azure Storage Account or even migrate from Jekyll to something else (e.g Hugo) without having to reformat the content.

A couple of great benefits with basing content on Markdown with Jeykll, is that I no longer need plugins to format code or maintain tables, as these are natively handled by Markdown and formatted by Jeykll.

Getting out of WordPress

I attempted a few other approaches without luck. Fortunately I had been using a plugin to backup my WordPress install (database, content etc.), so I’ve resorted to deploying a copy of the site onto an Ubuntu VM in my lab using this article: How to Install a LAMP Stack on Ubuntu 18.04. Without a doubt, I can say that I have better things to do with my time than working out how to deploy fucking LAMP on Ubuntu, at least I do now have a copy of WordPress locally that I can use to ensure that my content has been migrated OK.

I did grab a few additional items from the old site via CPanel including some resources I’ve made available over the years and may upload them to the new site if I get around to it. It may be simpler for me just to maintain them in a repository on GitHub.

Once I could run the export from WordPress, I was then left with a Jekyll export folder:

I won’t go into detail here on the Jekyll setup process as there are several great articles already to refer to:

For me the basic process was as follows:

As far as I could tell, the switch was pretty much seamless. Other than having to fix articles and put back some features over time (e.g. search), the content is all there and I now pay nothing for by site hosting.

WordPress generates several image sizes when uploading them (e.g. screenshots). Now in Jeykll, I rely on a single image only and have done away with thumbnails etc. Additionally, I’ve run PNGOUT across most images to ensure they are optimised for size. Here’s the basic PowerShell commands I used to removed unneeded thumbnails and optimise images:

I use ImageOptim to optimise PNG and JPG media as I write new posts. PNGGauntlet for Windows also looks like a good choice.

Apart from the aforementioned ImageOptim, here’s what I’m using to write an maintain my site:

When it comes to find and replace with Visual Studio Code, you’ll need to leverage RegEx to get the most out of it. You can searach within a file and also search across multiple files at the same time. 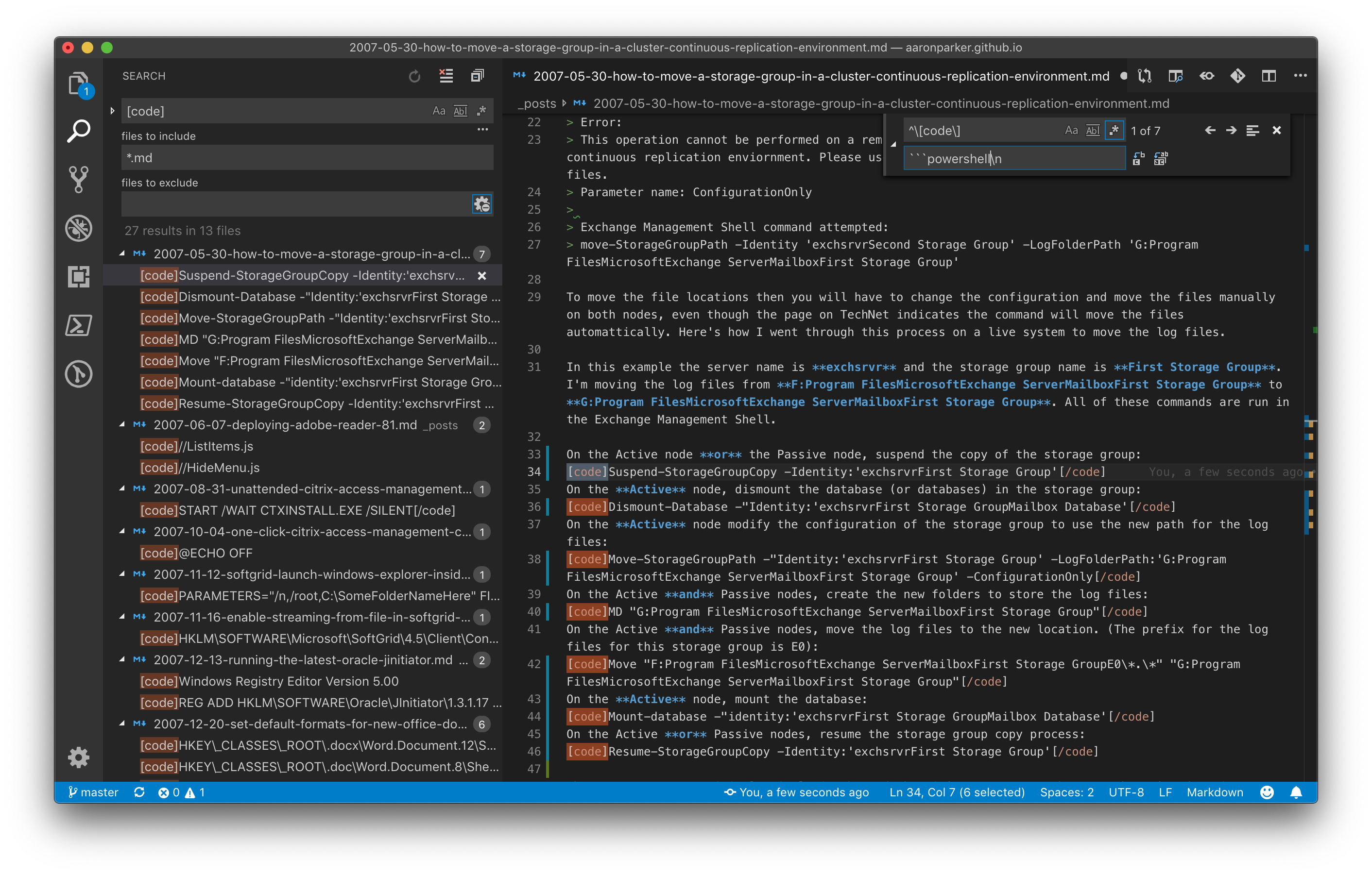 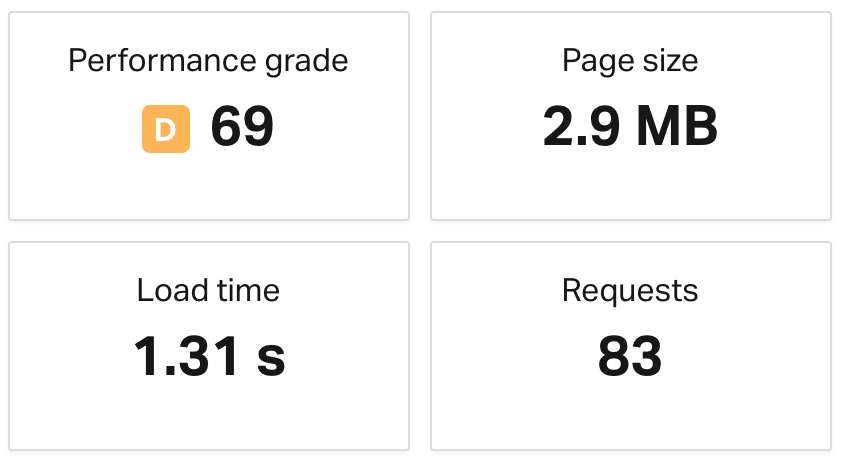 That’s probably OK on a broadband connection with a modern PC. Still, a performance grade of D doesn’t make me happy. Here’s the same page after migrating to Jekyll: 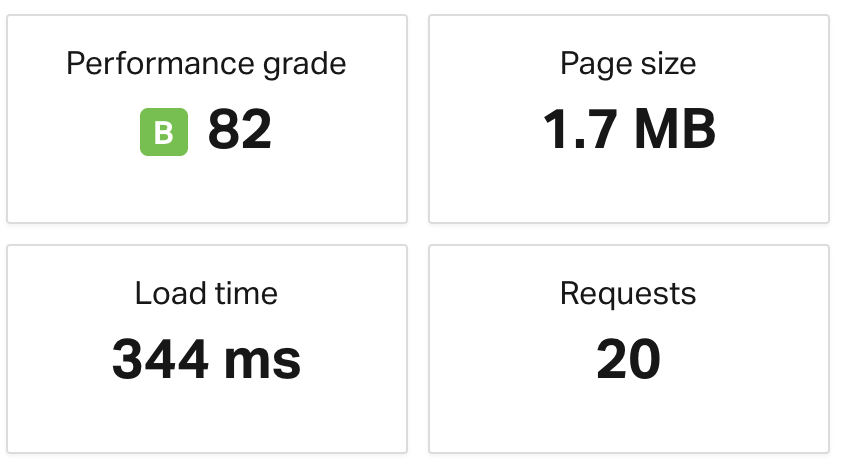 The new site receives a performance grade upgrade with an impressive reduction in page size, load time and the number of HTTP requests to load the page. Giving this some thought, I believe this is due to a number of improvments including a removal of header images I was using on WordPress, less JavaScript from WordPress add-ins and the removal of a couple of other items including advertisments.

Both of these results have tested the site behind Cloudflare. Testing directly against GitHub Pages actually show a performance improvement, but there’s good reasons to keep the site on Cloudflare that I’ll cover later in this article.

Now I’ll show you some site-wide stats that provide more depth into the before and after performance of the site and why we’re seeing the improvements in page load time. Let’s take a look at the number of visitors over the past week. This pattern is always the same - dips over the week-end and back up to its peak around Wednesday. The graph below shows the same number of unique visitors before and after the migration. 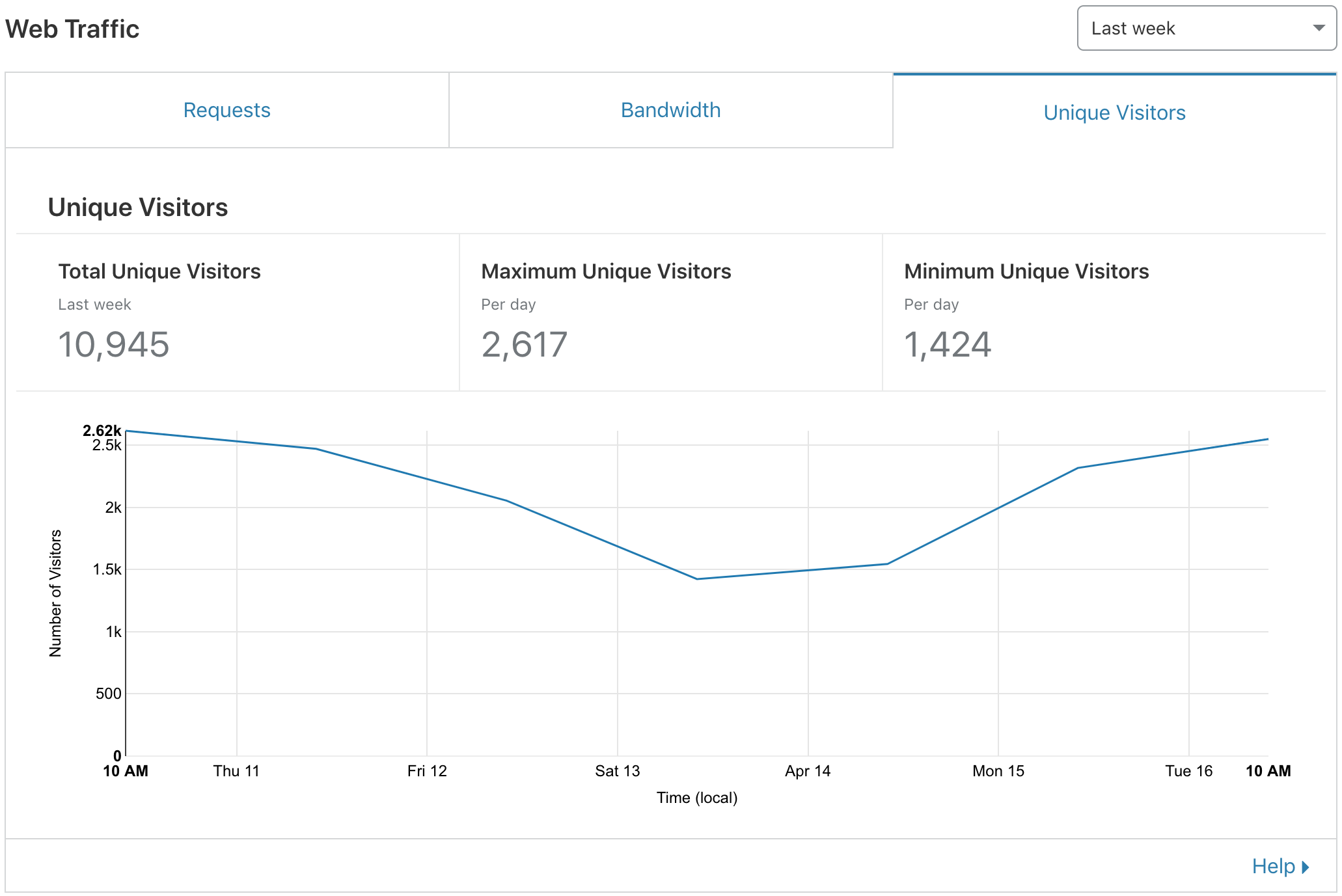 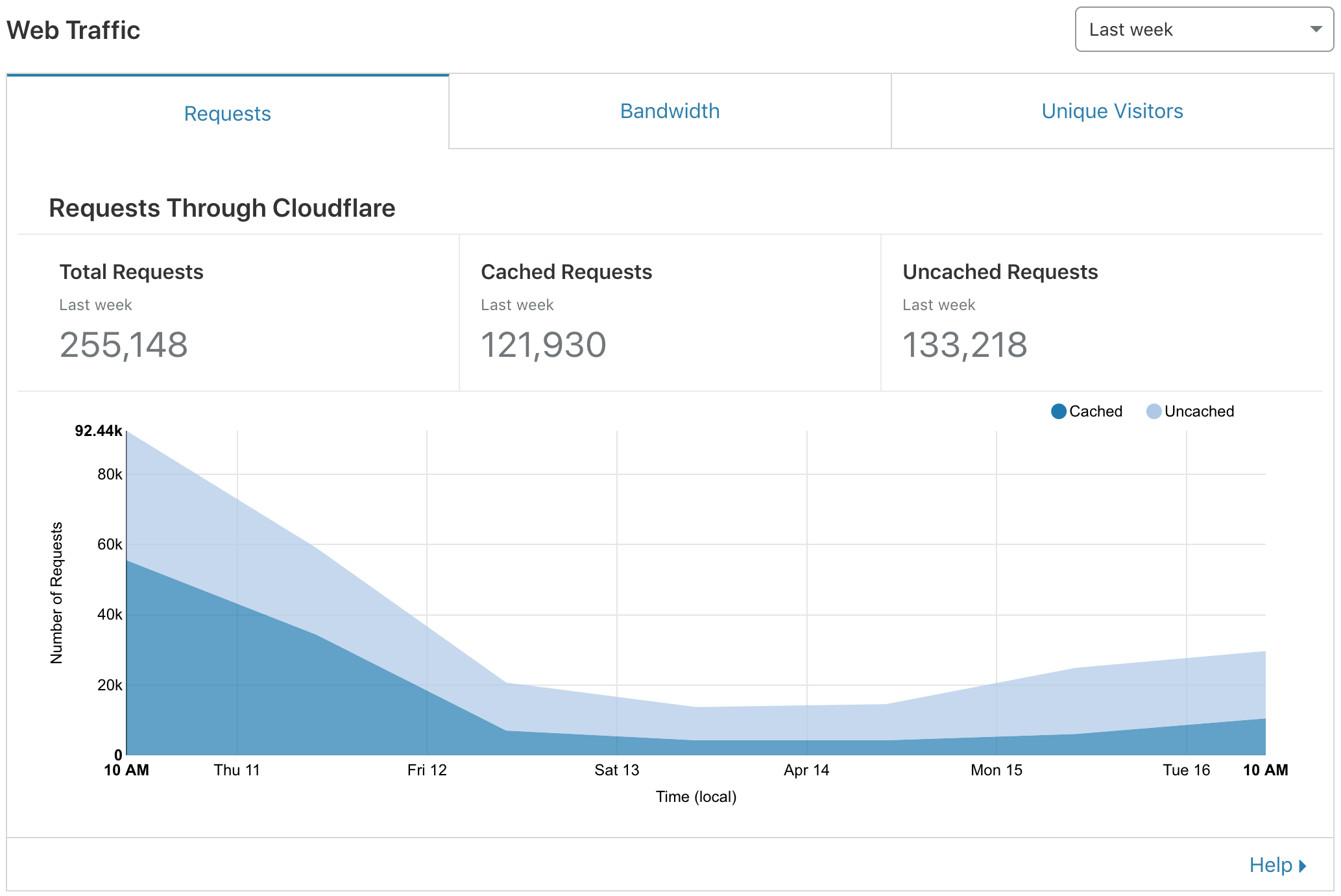 Finally, let’s look at the amount of bandwidth, again serving the same number of unique visitors: 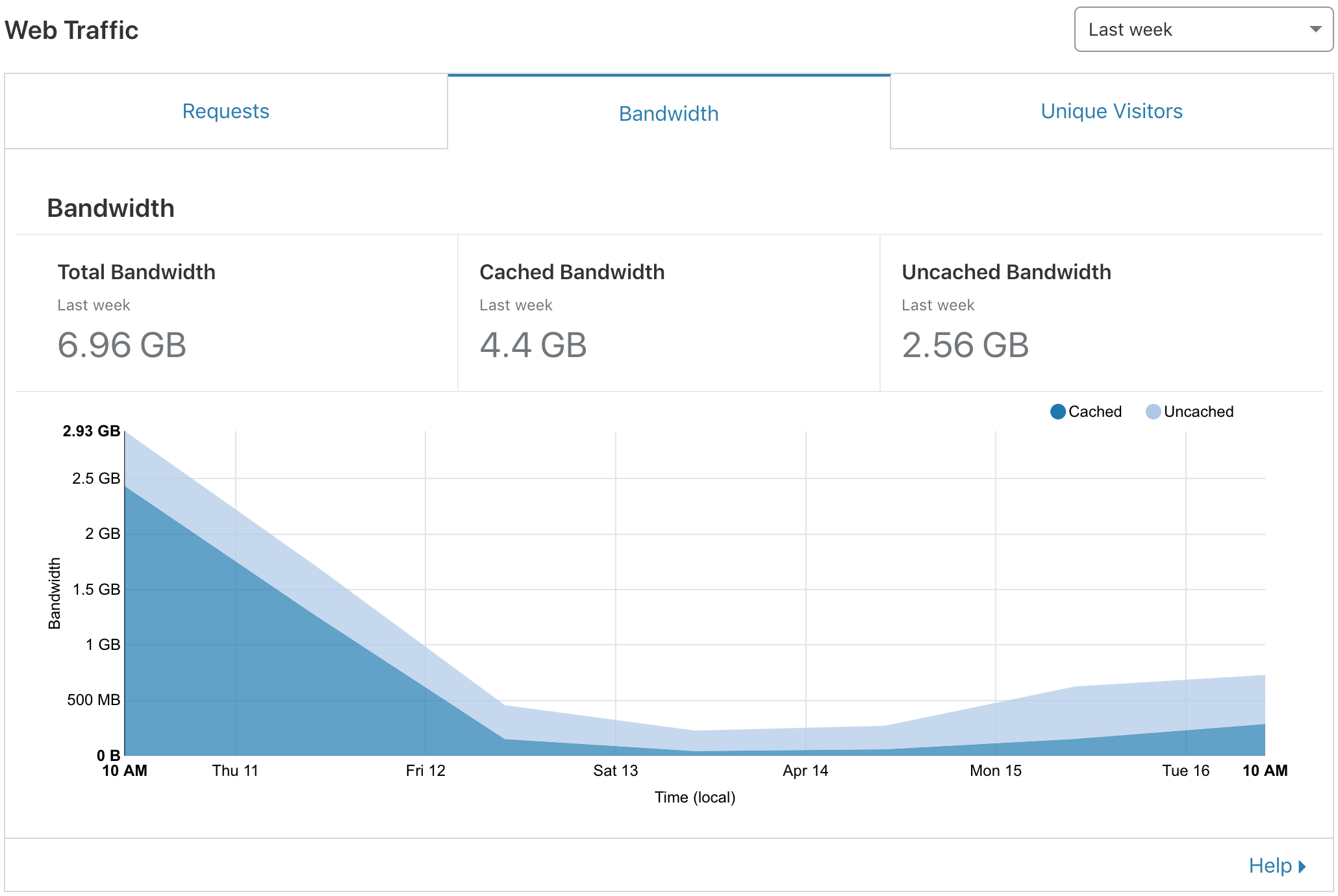 The WordPress site was serving 2.93 GB in a single day and now the Jekyll version is only serving 729 MB. Over time, I hope to see more of the site served from the Cloudflare CDN cache, but already we can see the reduction in requests and bandwidth helping to explain the improvement in site performance.

While it’s possible to enable HTTPS for GitHub Pages on a custom domain with certificates automatically issued by Let’s Encrypt, I’ve stuck with fronting the site with Cloudflare to ensure that I have more control over caching, performance and security. I’m still using the Cloudflare free tier.

Below are some rough notes and pointers for configuring GitHub Pages with Jekyll and integration with Cloudflare:

Cloudflare Page Rules allows me to take a more aggressive approach to caching, especially for the largest content on the site which is typically screenshots.

If you also want to free yourself from WordPress and build a blog site based on a static site generator, here’s what to consider: